For those of you not into the anime/manga scene, one of the latest series that’s been a real hit in Japan is Shingeki no Kyojin (進撃の巨人 “Attack on Titan”) created by Hajime Isayama and published by Kodansha. It has been adapted into an anime series by Wit Studio (Season 2 pending a release date), and will soon be made into a live-action feature film. The story of Shingeki no Kyojin is classified as a dark fantasy/dystopian tragedy that centers on Eren Yeager, his adoptive sister Mikasa Ackerman, and their friend Armin Arlert.

We are introduced to a world wherein the human race is on the brink of extinction. Over a hundred years prior to the start of the series, giant humanoid creatures called Titans emerged and without warning, began killing off humankind. Now, man struggles to survive, hiding in a massive city protected by a series of three 50 meter high walls to keep the Titans out and what’s left of the human race safe.

The walls are divided into three regions, Wall Maria, the outermost wall, Wall Rose, the middle wall, and Wall Sina, the innermost wall which houses the royal family, and ultimately, the safest place for human civilization.

When we first meet Eren, Mikasa, and Armin, they are twelve-year-old children and residents of Wall Maria’s Shiganshina District, living relatively peaceful lives. The worst that could happen to them inside the walls was Eren getting into fights with other kids and needing Mikasa to rescue him, or protecting Armin from bullies. But of course, as all stories like these go, their utopian-like days of peace were quick to end.

One day, a Titan appears outside Wall Maria. This Titan is unlike anything mankind has seen before–it’s massive, standing at over 60 meters tall–and peers over the wall. A second Titan appears in a flash of light, smaller than the first, but with armored skin. Then, the Colossal Titan does what every human being left alive has feared–it breaks a hole in the wall, leaving room for the Titans beyond the walls to enter the Shiganshina District. As Titans begin their rampage, countless human lives are lost in the ensuing chaos. The second Titan, the Armored Titan, deals the critical blow by smashing through Wall Maria.

And on this day, Eren’s life is irrevocably changed as he is forced to watch as his mother is eaten alive by a Titan. He and his friends, Mikasa and Armin, are able to escape to the interior of Wall Rose. Eren swears vengeance and vows to take back Wall Maria by enlisting in the city’s military and joining the Survey Corps, a branch dedicated to killing Titans outside the walls. Both Mikasa and Armin vow to follow his lead and they plan to enlist as well.

Titans by Class, scale ranging from the Colossal Titan to average-sized Titans to humans.

Three years later, Eren, Mikasa, and Armin, now-fifteen years old, graduates of the 104th Class,  are now looking forward to saying goodbye to their trainee days and starting out as members of the Survey Corps. But on the day before they can formally join the Corps, humankind comes under threat once more as the Colossal and Armored Titans make their reappearance outside the Trost District of Wall Rose.

Eren, eager to seek vengeance over the events of the years prior, tries to face off against the Colossal Titan on his own, only to have the Titan vanish in a cloud of smoke. Then, the Trost District wall is breached, and the events of Eren’s past threaten to repeat themselves as Titans flood the Trost District, devouring every human in sight, including several of Eren’s fellow classmates, who are forced to stand and fight as soldiers of the military.

The graduates of the 104th Class do their best to battle the Titans to allow the citizens of Trost to escape, but they find themselves quickly overwhelmed. Just as soon as a Titan is cut down, another takes its place as more enter Trost through the breach. The soldiers find themselves in a dire predicament: they’re running out of blades and compressed gas to power their special three-dimensional maneuver gear (3DMG), which enables them to fight the Titans.

Things take a turn for the worst as Eren and Armin find themselves cornered. As their comrades go down one by one, Eren himself is at the Titans’ mercy, as one Titan manages to bite off his leg as he attempts to withdraw. The shock of the injury causes Eren to fall unconscious, leaving Armin on his own. Moments later, Armin is in the jaws of a Titan, and Eren, having come to hearing his best friend’s screams, dives into the Titan’s mouth and throws Armin out so that he falls safely onto the adjacent rooftop below. Eren is devoured, and a stunned Armin faints from the trauma of simultaneously losing his best friend and nearly losing his own life. 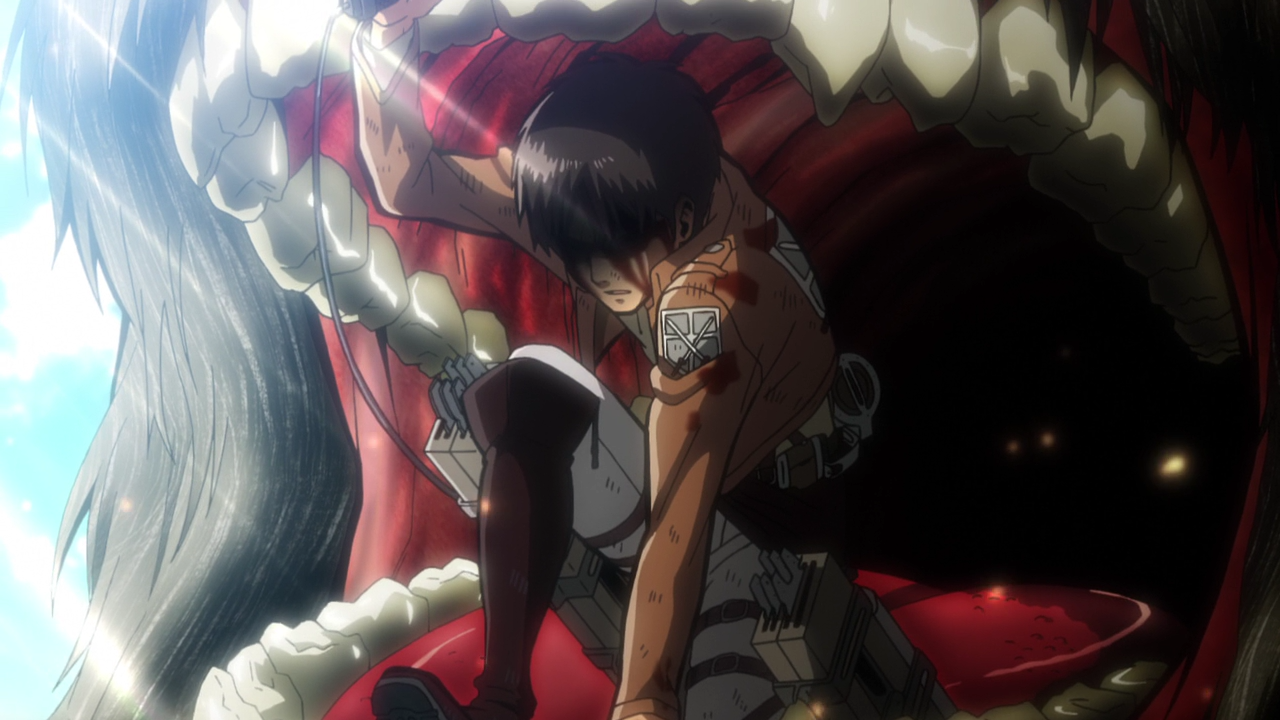 Eren makes the ultimate sacrifice to save Armin from certain death.

And that’s when things in this series get really interesting. To think that this is only the beginning!

With a start like this, it’s no wonder why Shingeki no Kyojin is such a hit. I know I was pulled in right away, with the explosive action, Isayama’s strong characters, incredible voice acting (for the anime), sharp, punchy dialogue (for the manga), and an engaging story that draws from the ever-attractive premise of mankind’s struggle for survival.

I feel that what drew me most to this series wasn’t the hype as it made its way to the U.S., but the universe that it was set in. After imagining my own post-apocalyptic world, it’s always fascinating to see how other people imagine the final days of the human race. What sort of tragedy occurred to put the world in the state that it is? Who is the enemy here? What does mankind do to survive? How do we fight for our right to live?

That struggle from direst of circumstances to an eventual triumph is really truly fascinating for me. Everyone has a unique struggle, a certain obstacle to overcome. And when faced in these kinds of situations, it’s possible to see the true strength of the human spirit and how powerful the will to survive can be.

After having watched the entire first season in a period of less than three days (which I found myself foregoing sleep for the sake of watching episodes) and reading the manga (which also caused a similar loss of sleep), I can say that this series does not disappoint in the least. Just be prepared for a gripping story that will compel you to watch it from start to finish! All in all, I’m really looking forward to watching Season 2 and seeing everything portrayed in the manga come to life both in anime form and onscreen in its soon-to-be-released feature films.

The entire first season of Shingeki no Kyojin is available to stream on Netflix, Funimation’s website, and also on Crunchyroll. The first twelve volumes of the still-ongoing manga can be found in bookstores everywhere. New chapters of the manga are released monthly in Kodansha’s Bessatsu Shonen Magazine.