D.N.A.-Nothing Would Ever Be The Same 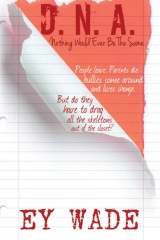 “How can you handle everything alone, Debney? You’re really just a kid. Get over the guilt of the party and relax more. I’ll stand by your side. I can’t fight for you or your reputation at school if you refuse to stand up for yourself. I can’t continue listening to the way they talk about you. Some of the things they have been saying about you make me–”

“Do you think I care what other people think of me?” Debney moved away and grabbed herself a canned drink from the refrigerator. In irritation she slammed the can on the counter. “There’s nothing in this world I can do to redeem myself. In the eyes of every student at school I’m the slut who slept with at least eight boys in one night. And they’re the ones I remember. An enormous feat for someone who was a virgin before it all started. Maybe I didn’t do it with all of them, but I do know they were at the house. Can you even imagine how this makes me feel? I can’t even look anyone in the face when I’m walking the hallways. The girls smirk and whisper and play asinine tricks. The guys full out laugh, point and call me names. Some of them make the cruelest suggestions. I won’t mention the incidents every time I go to the restroom or what happens if I happen to find myself alone in the hallway with a guy. To make it all worse, when I go to class I get these looks of sympathy and or disgust from the teachers. I don’t know how to act anymore. Should I be bold and slap people around or timid and hide my shame behind my books or hair? You even backed away from me for a while. I’m scared. I’m alone in more ways than one and today was the first day I felt the baby move and I had no one to tell.”

“What? What did you just say about a baby moving?”

“I dunno, have a baby.” She took a sip from the foaming can of coke she was holding.

“That’s it? That’s all you’re going to say?” Nadine paced quickly around the room like a person on the verge of a nervous breakdown, alternating the actions of waving her hands in the air, stopping to stare at Debney in disbelief and raking her fingers through her hair. In her excitement, she stumbled over the pillows and landed flat on her face in the middle of their softness. The crash not stopping her tirade, she flipped over and continued ranting, “You’re not going to cry? Go into hysterics? If it were me, I wouldn’t know what to do or who to tell. Are you really sure you’re pregnant? Have you taken any tests?”

“Yes and I already did the crying and ranting, but nothing changed. I’m still pregnant. I called the only person I knew I could talk to. This isn’t something I could have just text.”

“Maybe you took the wrong kind of test. Let’s go and get a different one. This just can’t be happening. How can you sit there and be so calm? I would be so scared.” She jumped up and held her arms in the air in exaggeration. “Hell, no I wouldn’t be…. I would be dead. My parents would kill me.”

“Well, unless my parents decide to return from their heavenly destination, it’s safe to say they won’t be coming to kill me.”

“Damn Debney, I’m sorry.” She joined Debney on the couch and placed her arms around her shoulders. “I keep saying the stupidest things tonight.”

“No, you say exactly what I figured you would. Why do you think I called you over? You are the most normal thing left in my world.”

Without warning, Debney began to cry. Like a thunderstorm that suddenly appears, her tears came in torrents. For a moment, she found comfort in her friend’s arms, but the emotions she had been holding inside rushed through her, and she could no more hold in her flood than a beaver’s dam could hold in Niagara Falls.
She rolled off the couch and buried her face in the pillows on the floor in an effort to squelch the screams that wanted to break through.